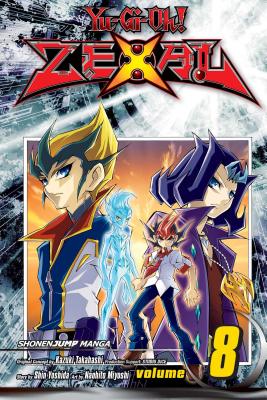 The latest Yu-Gi-Oh! series; includes an ultra-rare trading card that is highly valued by collectors.

In a futuristic city, augmented reality Duels are all the rage. Duelists, using devices called D-Gazers, can interact with their environment and their opponents as never before! With more awesome monsters and unbelievable cards, the future of Yu-Gi-Oh! starts right here!

The duel between Yagumo and Ryoga opens a door to another world that pulls in Yuma and his friends. On the other side, they discover that Yagumo is planning to use a black hole to destroy Earth and the Astral World! Yagumo, Ryoga, Kaito and Yuma band together to stop Yagumo, but even their combined strength may not be enough!