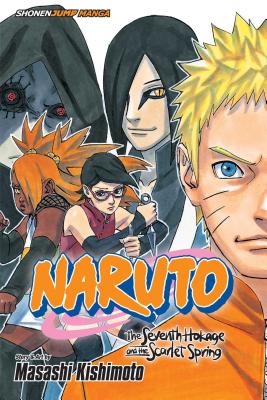 The Seventh Hokage and the Scarlet Spring

Naruto was a young shinobi with an incorrigible knack for mischief. Then he channeled that energy into learning amazing ninja techniques and saving the world! Now Naruto has achieved his dream of becoming the greatest ninja in the village, and his face sits atop the Hokage monument. But new troubles may be bubbling up in the shinobi world…

In the years since the great ninja war, peace has bloomed in the ninja world, and a new generation has begun to take root. Naruto’s work as Hokage seems to be pretty mundane, but his son, Boruto, is constantly demanding attention. Luckily for Naruto, he can make clones of himself to babysit his son. But Sasuke’s daughter, Sarada, could be the target of a mysterious figure who has connections to the Uchiha clan!