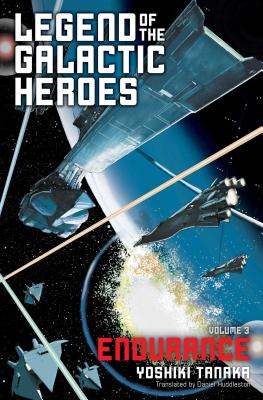 It’s the master tactician of the ruthless Galactic Empire versus the Free Planets Alliance in Japan’s greatest space opera epic!

In the thirty-sixth century, humanity has conquered the galaxy and colonized countless star systems. The Galactic Empire, modeled along Prussian lines, and the democratic Free Planets Alliance are at war, and the fate of every human being in the universe hangs in the balance. This classic Japanese space opera, adapted into a legendary anime, is finally available in English for the first time.

A grand scheme for retaking Iserlohn is delivered to Reinhard, who with renewed determination seeks to become ruler of the galaxy and to fulfill the oath he made with a dear, departed friend. But what are the aims of Phezzan, the third force at work behind the scenes? Meanwhile, no sooner is Yang breathing a sigh of relief when Julian returns from his first combat mission than he is summoned to an inquest and departs for the capital of the alliance. As if waiting for this opportunity to strike, however, the imperial military's secret weapon appears right at the gates of Iserlohn. The battle begins! Who will endure?

Yoshiki Tanaka was born in 1952 in Kumamoto Prefecture and completed a doctorate in literature at Gakushuin University. Tanaka won the Gen’eijo (a mystery magazine) New Writer Award with his debut story “Midori no Sogen ni…” (On the Green Field…) in 1978 and then started his career as a science fiction and fantasy writer. Legend of the Galactic Heroes: Dawn, which translates the European wars of the nineteenth century to an interstellar setting, won the Seiun Award for best science fiction novel in 1987. Tanaka’s other works include the fantasy series The Heroic Legend of Arslan and many other science fiction, fantasy, historical, and mystery novels and stories.
or
Buy Here
Copyright © 2020 American Booksellers Association