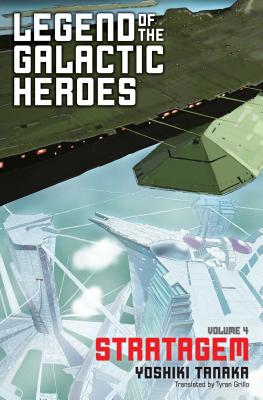 Legend of the Galactic Heroes, Vol. 4

Remnants of the high nobility, manipulated by the “third power” of Phezzan, abduct the seven-year-old emperor and, with the cooperation of the Free Planets Alliance, declare the establishment of a traditional imperial government. Reinhard, however, has turned the tables by making a secret pact with Phezzan’s high officials and plans a grand invasion of the alliance by way of the Phezzan Corridor. So begins an epic battle between Yang—who, despite surmising Reinhard’s true intentions, must defend Iserlohn—and the Imperial Navy’s peerless fighter, von Reuentahl.

Yoshiki Tanaka was born in 1952 in Kumamoto Prefecture and completed a doctorate in literature at Gakushuin University. Tanaka won the Gen’eijo (a mystery magazine) New Writer Award with his debut story “Midori no Sogen ni…” (On the Green Field…) in 1978 and then started his career as a science fiction and fantasy writer. Legend of the Galactic Heroes: Dawn, which translates the European wars of the nineteenth century to an interstellar setting, won the Seiun Award for best science fiction novel in 1987. Tanaka’s other works include the fantasy series The Heroic Legend of Arslan and many other science fiction, fantasy, historical, and mystery novels and stories.
Loading...
or support indie stores by buying on