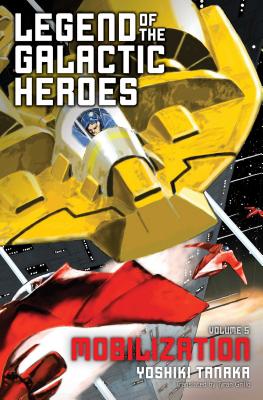 Legend of the Galactic Heroes, Vol. 5

In the thirty-sixth century, humanity has conquered the galaxy and colonized countless star systems. The Galactic Empire, modeled along Prussian lines, and the democratic Free Planets Alliance are at war, and the fate of every human being in the universe hangs in the balance. This classic Japanese space opera, adapted into a legendary anime, is finally available in English for the first time.

Imperial forces have captured the Phezzan Dominion and draw ever closer to the Free Planets Alliance capital of Heinessen. Yang hurriedly abandons Iserlohn Fortress and heads for the capital to protect countless civilians. Taking out Reinhard is the alliance’s only path to victory. Despite the empire’s superior numbers, Yang continues to outwit its most resourceful generals via tactical wizardry. Reinhard, on the other hand, seeing through Yang’s devices, opts for all-out war. And so, the “invincible” and “undefeated” once again clash swords. Who will emerge victorious?

Yoshiki Tanaka was born in 1952 in Kumamoto Prefecture and completed a doctorate in literature at Gakushuin University. Tanaka won the Gen’eijo (a mystery magazine) New Writer Award with his debut story “Midori no Sogen ni…” (On the Green Field…) in 1978 and then started his career as a science fiction and fantasy writer. Legend of the Galactic Heroes: Dawn, which translates the European wars of the nineteenth century to an interstellar setting, won the Seiun Award for best science fiction novel in 1987. Tanaka’s other works include the fantasy series The Heroic Legend of Arslan and many other science fiction, fantasy, historical, and mystery novels and stories.
Loading...
or support indie stores by buying on