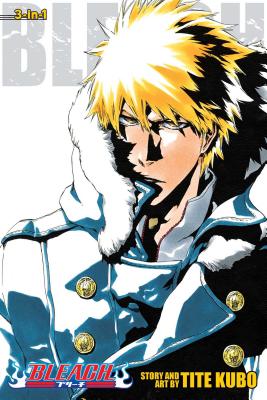 Part-time high school student, full-time Soul Reaper, Ichigo is one of the chosen few sword-wielding guardians of the afterlife.

The war with Aizen is finally over, but the aftermath is just beginning. Ichigo lost his Soul Reaper powers in the last battle, and he now must try to live the quiet life of an ordinary mortal. But his attempts at being average are interrupted by a mysterious man who claims he can help Ichigo regain his powers. Who is this stranger, and what are his real motives…?

Bleach is author Tite Kubo's second title. Kubo made his debut with ZOMBIEPOWDER., a four-volume series for Weekly Shonen Jump. To date, Bleach has been translated into numerous languages and has also inspired an animated TV series that began airing in Japan in 24. Beginning its serialization in 21, Bleach is still a mainstay in the pages of Weekly Shonen Jump. In 25, Bleach was awarded the prestigious Shogakukan Manga Award in the shonen (boys) category.
or support indie stores by buying on
Copyright © 2020 American Booksellers Association