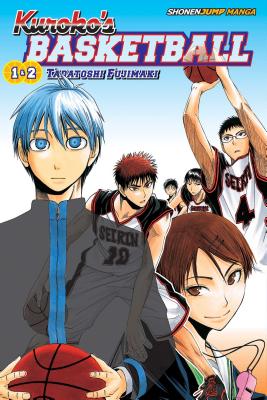 Seirin High’s greatest basketball superstar was the one no one literally saw coming—the invisible Kuroko!

Tetsuya Kuroko doesn’t stand out much. In fact, he’s so plain that people hardly ever notice when he’s around. Though he’s just as unremarkable on the basketball court, that’s where his plainness gives him an unexpected edge—one that lets him execute awesome moves without others noticing!

When incoming first-year student Taiga Kagami joins the Seirin High basketball team, he meets Tetsuya Kuroko, a mysterious boy who’s plain beyond words. But Kagami’s in for the shock of his life when he learns that the practically invisible Kuroko was once a member of “the Miracle Generation”— the undefeated legendary team—and he wants Kagami’s help taking down each of his old teammates!

Tadatoshi Fujimaki was born on June 9, 1982, in Tokyo. He made his debut in 2007 in Akamaru Jump with Kuroko's Basketball, which was later serialized in Weekly Shonen Jump. Kuroko's Basketball quickly gained popularity and became an anime in Japan in 2012.
Loading...
or support indie stores by buying on
(This book is on backorder)