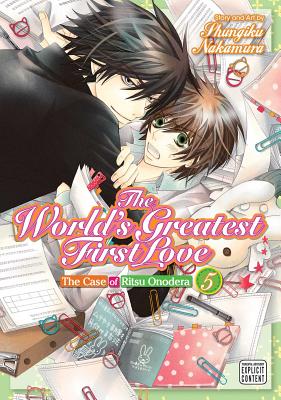 Masamune Takano is the boss—and first love—of rookie shojo manga editor Ritsu Onodera. But Ritsu also has a fiancée, An Kohinata, whom he was betrothed to as a child. When Takano finds out about her, his relationship with Ritsu hits the rocks, but Ritsu manages to salvage the wreckage. Now Ritsu has to attend his first formal company dinner party, where he runs into An! She confesses (again), and Ritsu turns her down (again)—but this time Takano overhears An when she accuses Ritsu of stubbornly clinging to his old flame from high school, who is none other than Takano himself!

Shungiku Nakamura is one of the most popular yaoi creators worldwide. She is best known for her series Junjo Romantica, which has been adapted into both an anime and drama CD. Her other English language title, Hybrid Child, is also being adapted into an anime. Her current series, The World’s Greatest First Love, is running in Emerald magazine. Born on December 13, she’s a Sagittarius with an O blood type.
Loading...
or
Not Currently Available for Direct Purchase