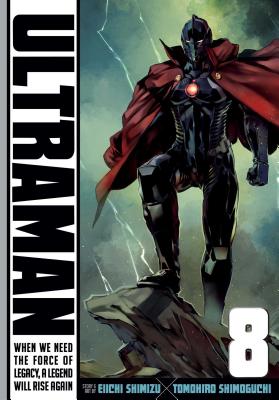 It’s time for a new generation of Ultraman!

Decades ago, a being known as the Giant of Light joined together with Shin Hayata of the Science Special Search Party to save Earth from an invasion of terrifying monsters called Kaiju. Now, many years later, those dark days are fading into memory, and the world is at peace. But in the shadows a new threat is growing, a danger that can only be faced by a new kind of hero—a new kind of Ultraman…

Fighting to protect his childhood friend Yuko from the shadowy group that sent the Ace Killer Squad after him, Seiji Hokuto has his work cut out for him. Shinjiro, Jack and the alien Red also join the fight. But the members of the Ace Killer Squad are more ruthless than any enemy Shinjiro has ever faced. Taking down these villains is going to take some help from an older and very upset Ultraman!

Eiichi Shimizu was born in Osaka and is blood type O (or maybe A). He is responsible for mecha design and sometimes character design, along with mecha sequence writing.

Tomohiro Shimoguchi was born in Ishikawa Prefecture and is blood type O. He does character design and is the main series writer.
Loading...
or support indie stores by buying on