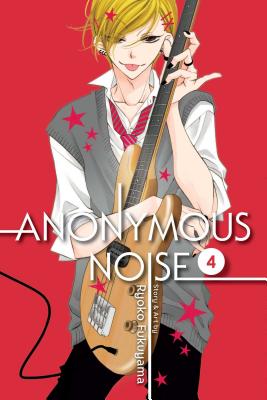 Music and longing collide in this ballad of unrequited love!

Nino Arisugawa, a girl who loves to sing, experiences her first heart-wrenching goodbye when her beloved childhood friend, Momo, moves away. And after Nino befriends Yuzu, a music composer, she experiences another sad parting! Luckily, Nino reunites with Momo and Yuzu in high school, but things haven’t played out the way anyone expected…

Yuzu thought he’d resigned himself to just being friends with Nino, his “Alice.” But now that he’s faced with the prospect of losing her voice to Momo, he’s having second thoughts—and has resolved to confront Momo directly! Meanwhile, the feelings that Momo has been hiding for so long seem to have reached a boiling point!

Born on January 5 in Wakayama Prefecture in Japan, Ryoko Fukuyama debuted as a manga artist after winning the Hakusensha Athena Shinjin Taisho Prize from Hakusensha’s Hana to Yume magazine. She is also the author of Nosatsu Junkie. Anonymous Noise was adapted into an anime in 2017.
or support indie stores by buying on