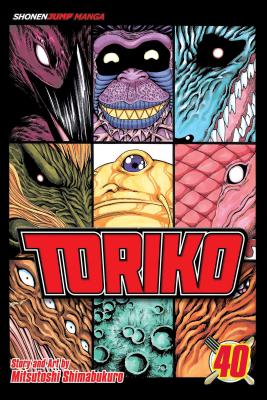 In the final moments before the Gourmet Eclipse, Toriko and the gang are finally reunited and partake in the parts of Acacia’s Full-Course Meal that have been captured so far. What sort of power will the Full-Course Meal impart to Toriko and his friends? Meanwhile, things are getting a little too slimy for Don Slime as he goes head-to-head against Neo, who gets more and more powerful with every bite! With the end of the world looming overhead and the coming of God imminent, will everyone be ready for the disasters to come?

Mitsutoshi Shimabukuro made his debut in Weekly Shonen Jump in 1996. He is best known for Seikimatsu Leader Den Takeshi! for which he won the 46th Shogakukan Manga Award for children's manga in 2001. His current series, Toriko, began serialization in Japan in 2008.
Loading...
or support indie stores by buying on
(This book is on backorder)