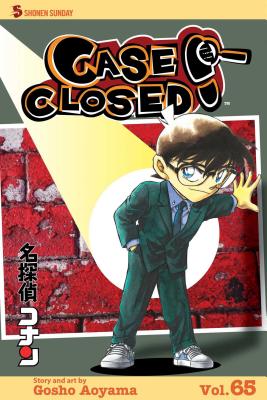 On the trail of a gang of bank robbers, Agent Starling teams up with the Junior Detective League. But she finds more than she expected when she uncovers evidence that Agent Akai, believed to have been assassinated by the Men in Black, may be alive!

Then Mr. Moore is summoned to a mansion to investigate a strange murder, only to find that the killer isn’t finished. Why were five gifted people invited to live in the mansion, and what is the secret of the Red Wall?

Gosho Aoyama made his debut in 1992 with Chotto Matte (Wait a Minute), which won Shogakukan's prestigious Shinjin Comic Taisho (Newcomer's Award for Comics) and launched his career as a critically acclaimed, top-selling manga artist. In addition to Detective Conan, which won the Shogakukan Manga Award in 2001, Aoyama created the popular manga Yaiba, which won the Shogakukan Manga Award in 1992. Aoyama's manga is greatly influenced by his boyhood love for mystery, adventure and baseball, and he has cited the tales of Arsene Lupin and Sherlock Holmes and the samurai films of Akira Kurosawa as some of his childhood favorites.
or
Not Currently Available for Direct Purchase
Copyright © 2020 American Booksellers Association