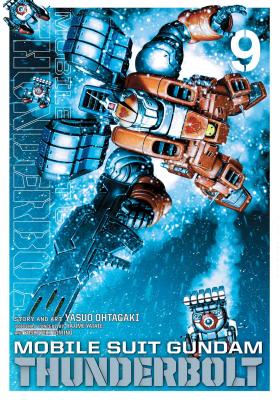 An epic story of war and survival set in the legendary Gundam universe!

In the Universal Century year 0079, the space colony known as Side 3 proclaims independence as the Principality of Zeon and declares war on the Earth Federation. One year later, they are locked in a fierce battle for the Thunderbolt Sector, an area of space scarred by the wreckage of destroyed colonies.

On the Nanyang Alliance floating city known as the Rig, Daryl Lorenz and his Zeon infiltration team have made their move to grab the Alliance’s data on the production of the Psycho Zaku. But Claudia—now a convert and servant of the Alliance leader, Sojo Levan Fu—has discovered Daryl’s squad. A massacre is averted after Levan Fu channels his awesome Newtype psychic abilities through Claudia to speak to Daryl, urging him to give up the path of killing. As things come to a head, the Federation assault ship Spartan arrives…