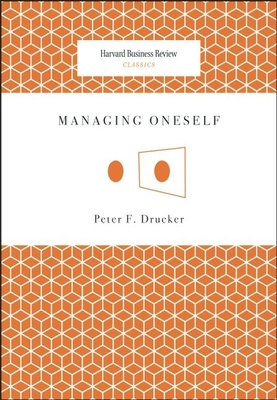 We live in an age of unprecedented opportunity: with ambition, drive, and talent, you can rise to the top of your chosen profession regardless of where you started out. But with opportunity comes responsibility. Companies today aren't managing their knowledge workers careers. Instead, you must be your own chief executive officer. That means it's up to you to carve out your place in the world and know when to change course. And it's up to you to keep yourself engaged and productive during a career that may span some 50 years. In Managing Oneself, Peter Drucker explains how to do it. The keys: Cultivate a deep understanding of yourself by identifying your most valuable strengths and most dangerous weaknesses; Articulate how you learn and work with others and what your most deeply held values are; and Describe the type of work environment where you can make the greatest contribution. Only when you operate with a combination of your strengths and self-knowledge can you achieve true and lasting excellence. Managing Oneself identifies the probing questions you need to ask to gain the insights essential for taking charge of your career. Peter Drucker was a writer, teacher, and consultant. His 34 books have been published in more than 70 languages. He founded the Peter F. Drucker Foundation for Nonprofit Management, and counseled 13 governments, public services institutions, and major corporations.

Peter F. Drucker (1909-2005) is one of the best-known and most widely influential thinkers on the subject of management theory and practice, and his writings contributed to the philosophical and practical foundations of the modern corporation.Often described as the father of modern management theory, Drucker explored how people are organized across the business, government, and nonprofit sectors of society; he predicted many of the major business developments of the late twentieth century, including privatization and decentralization, the rise of Japan to economic world power, the critical importance of marketing, and the emergence of the information society with its implicit necessity of lifelong learning. In 1959, Drucker coined the term knowledge worker and in his later life considered knowledge-worker productivity to be the next frontier of management.Peter Drucker died on November 11, 2005, in Claremont, California. He had four children and six grandchildren.You can find more about Peter F. Drucker at cgu.edu/center/the-drucker-institute.
Loading...
or support indie stores by buying on