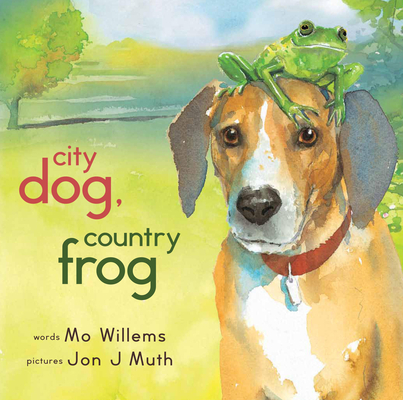 “From a dynamic duo, this is one of those picture books that manages to capture sweet without being saccharine. City Dog becomes friends with Country Frog. Jon J Muth's dreamy watercolors show them playing during spring, summer, and fall. When winter begins, City Dog runs to find Country Frog, but Country Frog isn't there. Spring comes again and City Dog is sitting near Country Frog's rock, when Country Chipmunk finds him, and the reader knows the friendship cycle, like the seasons, will begin all over again.”
— Rebecca Fabian, Odyssey Bookshop, South Hadley, MA
View the List

In spring, when City Dog runs free in the country for the first time, he spots Country Frog sitting on a rock, waiting for a friend. “You’ll do,” Frog says, and together they play Country Frog games. In summer, they meet again and play City Dog games. Through the seasons, whenever City Dog visits the country he runs straight for Country Frog’s rock. In winter, things change for City Dog and Country Frog. Come spring, friendship blooms again, a little different this time.

Mo Willems’ spare, poignant text and Jon J. Muth’s expressive watercolors team up to tell a story that will resonate with readers of all ages.

Mo Willems (www.pigeonpresents.com) is New York Times best-selling author and illustrator of picture books and early readers that have changed the face of children’s literature. He has been awarded a Caldecott Honor on three occasions, and two of his Elephant and Piggie early readers have received a Theodor Seuss Geisel Medal. His most recent picture book is Naked Mole Rat Gets Dressed, of which Bulletin of the Center for Children’s Books wrote: “Willems continues to be a master at conveying an amazing amount of emotion and humor using . . . minimal elements” in a starred review. This is the first book he has written and not illustrated.