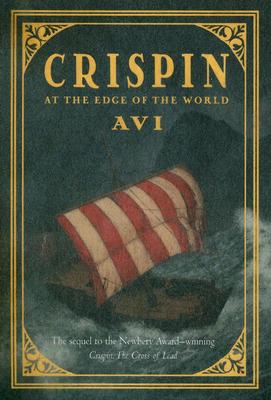 At the Edge of the World

The more I came to know of the world, the more I knew I knew it not.

He was a nameless orphan, marked for death by his masters for an unknown crime. Discovering his name- Crispin-only intensified the mystery. Then Crispin met Bear, who helped him learn the secret of his full identity. And in Bear-the enormous, red-bearded juggler, sometime spy, and everyday philosopher-Crispin also found a new father and a new world.

Now Crispin and Bear have set off to live their lives as free men. But they don't get far before their past catches up with them: Bear is being pursued by members of the secret brotherhood who believe he is an informer. When Bear is badly wounded, it is up to Crispin to make decisions about their future-where to go, whom to trust. Along the way they become entangled with an extraordinary range of people, each of whom affects Crispin and Bear's journey in unexpected ways. To find freedom and safety, they may have to travel to the edge of the world-even if it means confronting death itself.

In this riveting sequel to the Newbery-Award winning Crispin: The Cross of Lead-the second book in a planned trilogy-Avi explores themes of war, religion, and family as he continues the adventures of Crispin and Bear.

Avi's books are loved by kids and adults everywhere. He has written more than 50 books, several of which have garnered prestigious awards, including the Newbery Award and two Newbery Honors. His titles with Hyperion include Crispin: The Cross of Lead, Crispin: At the Edge of the World, and "The Book Without""Words." He lives with his family in Colorado.
or
Not Currently Available for Direct Purchase
Copyright © 2020 American Booksellers Association