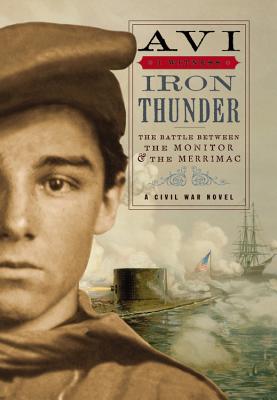 When his father is killed fighting for the Union in the War Between the States, thirteen-year-old Tom Carroll must take a job to help support his family. He manages to find work at a bustling ironworks in his hometown of Brooklyn, New York, where dozens of men are frantically pounding together the strangest ship Tom has ever seen. A ship made of iron.

Tom becomes assistant to the ship's inventor, a gruff, boastful man named Captain John Ericsson. He soon learns that the Union army has very important plans for this iron ship called the Monitor. It is supposed to fight the Confederate "sea monster"--another ironclad--the Merrimac. But Ericsson is practically the only person who believes the Monitor will float. Everyone else calls it "Ericsson's Folly" or "the iron coffin."

Meanwhile, Tom's position as Ericsson's assistant has made him a target of Confederate spies, who offer him money for information about the ship. Tom finds himself caught between two certain dangers: an encounter with murderous spies and a battle at sea in an iron coffin ?

Avi's books are loved by kids and adults everywhere. He has written more than 50 books, several of which have garnered prestigious awards, including the Newbery Medal and two Newbery Honors. His titles with Hyperion include Crispin: The Cross of Lead, Crispin at the Edge of the World, and The Book Without Words. He lives with his family in Colorado.
or
Not Currently Available for Direct Purchase