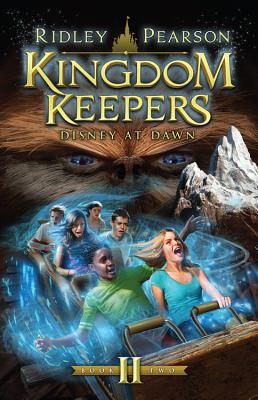 A brand-new rollicking thriller from best-selling author, Ridley Pearson, features our heroes from The Kingdom Keepers on a whole new adventure to save Disney World. Now in paperback!
It's supposed to be a happy day at the Magic Kingdom—the return of the teenaged holographic hosts. But things go very wrong when a sudden lightning storm disrupts the celebration, and Amanda's mysterious sister, Jez, disappears. The only clue is the sighting of a wild monkey in the Magic Kingdom during the storm. The mystery deepens as Finn is contacted by Wayne, an old man he hasn't heard from in months. Wayne tells Finn that there's trouble at the Animal Kingdom: the evil Overtakers have gained control of one of the computer servers that will be used to operate Daylight Holographic Imaging there. That means that if any of the holographic hosts fall asleep, they will go into comas—permanently.
Filled with action and brimming with the same meticulous detail as The Kingdom Keepers: Disney After Dark, this second book in the series—Disney at Dawn —is the result of hands-on research behind the scenes at Disney’s Animal Kingdom Park. Young and older readers alike will get a glimpse into a second Disney kingdom. The wild rides have only just begun; and the clock is ticking. How long can the teens keep themselves awake in their quest to find their friend—and what happens if they fail?
Read the entire Kingdom Keepers series!

Ridley Pearson is the best-selling co-author of Peter and the Starcatchers, Peter and the Shadow Thieves, Peter and the Secret of Rundoon, Escape From the Carnivale, Cave of the Dark Wind,Blood Tide, and Science Fair. He is also the author of eighteen novels, including The Kingdom Keepers, Cut and Run,The Middle of Nowhere, The Pied Piper, Beyond Recognition, No Witnesses, The First Victim, Undercurrents, and Parallel Lies. He was the first American to be awarded the Raymond Chandler/Fulbright Fellowship in Detective Fiction at Oxford University.
Loading...
or
Not Currently Available for Direct Purchase