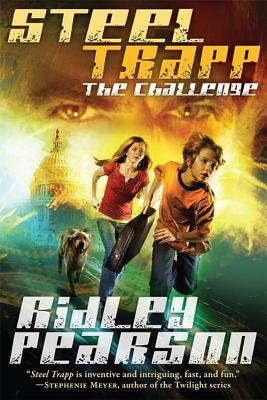 In this riveting thriller, 14-year-old Steven "Steel" Trapp sets off with his mom and their dog, Cairo, on a 2-day Amtrak journey to compete in the National Science Competition in Washington, DC. Steel is both blessed and cursed with a remarkable photographic memory--just one look and whatever he sees is imprinted for keeps. Trying to be a good Samaritan on the train, he instead becomes embroiled in an ingenious, international plot of kidnapping and bribery that may have links to terrorists. Federal agents (first seen in Pearson's adult thriller, Cut and Run) track Steel and his new-found science geek accomplice, Kaileigh Augustine, as they attempt to put together the pieces of a complex puzzle. Using Steel's science contest invention--and with the help of Cairo--Steel and Kaileigh lead readers on an action-packed chase adventure as they attempt to prevent the unimaginable, before it's too late.

Ridley Pearson is the best-selling co-author of Peter and the Starcatchers and Peter and the Shadow Thieves. He is also the author of eighteen novels, including The Kingdom Keepers, Cut and Run, "The Middle of Nowhere," "The Pied Piper," "Beyond Recognition," "No Witnesses," "The First Victim," "Undercurrents," and "Parallel Lies." He was the first American to be awarded the Raymond Chandler/Fulbright Fellowship in Detective Fiction at Oxford University. In addition, he secretly wrote "The Diary of Ellen Rimbauer," which was a companion book to the ABC-TV production of Stephen King's "Rose Red."
Loading...
or
Not Currently Available for Direct Purchase