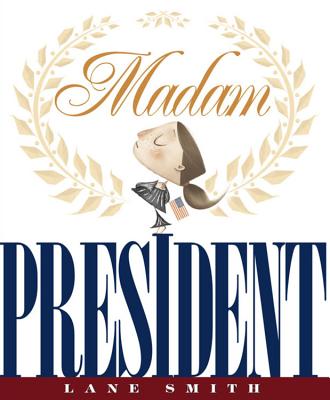 New York Times bestselling author-illustrator and Caldecott Honor-winner Lane Smith offers an entertaining and empowering vision of a strong girl in power, perfect for election season and year-round!
"This funny romp delivers a hefty message for today's girls: The White House is yours for the taking," says Kirkus Reviews of Madam President. A confident little girl imagines what her day would be like if she ran the country: There would be executive orders to give, babies to kiss, tuna casseroles to veto, and so much more! Not to mention that recess would definitely require more security.
With deadpan wit and hilarious illustrations, best-selling picture book creator Lane Smith introduces readers to an unforgettable new character.
* "Blends message with medium for maximum delight... Hail to the chief!" --- School Library Journal, starred review
* "In this sly, witty recitation of a president's responsibilities, a ponytailed girl has the list down pat: give executive orders (to her cat); negotiate treaties (between said cat and dog); kiss babies: and veto, veto, veto." --- Booklist, starred review
"A must-have title that will unite both sides of the (lunchroom) aisle." --- The Bulletin of the Center for Children's Books

* "Smith's understated text is accompanied by clean, cleverly designed compositions... In what appears to be mixed media involving digital and hand-painted scenes as well as collage, the artist creates a '60s feel with earth-toned backgrounds that resemble the faux grass wallpapers so evocative of the period... As in Smith's other spoofs, this book blends message with medium for maximum delight.... Hail to the chief!"—School Library Journal, starred review

* "Whether the U.S. gets a woman president is still in doubt, but here a female narrator has already taken the role. In this sly, witty recitation of a president's responsibilities, a pony-tailed girl has the list down pat: give executive orders (to her cat); negotiate treaties (between said cat and dog); kiss babies; and veto, veto, veto.... Kudos to Molly Leach, whose design makes everything from the lettering to the end pages look fabulous. Although there's some winking at adults, this book is very much for kids, who might even come away having learned a bit about presidential duties."—Booklist, starred review

"Though the Oval Office here is no more than a messy bedroom, this funny romp lightly delivers a hefty message for today's girls: The White House is yours for the taking."—Kirkus Reviews

"Most kids merely dream what they'll be when they grow up; Smith's heroine Katy lives the fantasy, charging through her day as self-proclaimed President of the United States.... There's a richness to this zany picture book in its respect for big dreams -- Katy is clearly inspired by the national heroes from Frederick Douglass to Susan B. Anthony who populate her books and adorn her walls.... Katy is a square-jawed force to be reckoned with, by turns smug, determined, conciliatory, outraged, and sweetly childlike.... This is a must-have title that will unite both sides of the (lunchroom) aisle."—The Bulletin of the Center for Children's Books

"Smith, who slyly recast U.S. history in John, Paul, George and Ben, introduces a zealous, freckled girl with presidential aspirations. Refreshingly, Katy skips the hand-wringing and never questions whether a girl could become commander-in-chief-instead, she behaves as if she is president already, fulfilling official duties at home and in school.... Smith gazes into the national future and just as ably skewers the pitfalls of political office."—Publishers Weekly

Lane Smith wrote and illustrated Grandpa Green, which was a 2012 Caldecott Honor book, and It's a Book, which was a New York Times bestseller has been translated into more than twenty-five languages. His other authored works include the national bestsellers Madam President and John, Paul, George & Ben, and he has created art for many books including the Caldecott Honor winner The Stinky Cheese Man, The True Story of the 3 Little Pigs, and I'm Just No Good at Rhyming (And Other Nonsense for Mischievous Kids and Immature Grown-Ups), among many others. His books have been New York Times Best Illustrated Books on four occasions. In 2012, the Eric Carle Museum named him a Carle Artist for "lifelong innovation in the field of children's picture books," and in 2014, he was the recipient of the lifetime achievement award from the Society of Illustrators. Lane and his wife, book designer Molly Leach, live in a rural Connecticut.
Loading...
or support indie stores by buying on