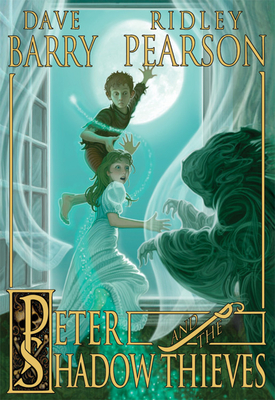 Peter and the Shadow Thieves (Peter and The Starcatchers)

Award winning authors, Dave Barry and Ridley Pearson have done it again—written a compulsively readable, impossible-to-put-down tale that will delight readers of all ages.
In this riveting and adventure-packed follow-up to Peter and the Starcatchers, we discover Peter leaving the relative safety of Mollusk Island—along with his trusted companion Tinker Bell—for the cold, damp streets of London. On a difficult journey across the sea, he and Tink discover the dark and deadly, slithering part-man/part-creature Lord Ombra. It seems that the dreaded Ombra has a variety of mysterious powers including the ability to make shadows disappear. When Peter reaches London, he sets out to find the indomitable Molly. Together they must combat Ombra’s terrible forces to both protect the Starcatchers and the treasured starstuff and most importantly to rescue Molly’s mother from the clutches of evil.

Dave Barry is a Pulitzer Prize - winning author of more than a dozen books, including Dave Barry's Money Secrets; Dave Barry’s Complete Guide to Guys; Dave Barry Slept Here; Big Trouble; and Dave Barry Hits Below the Beltway. Along with Ridley Pearson, he is the co-author of Peter and the Starcatchers, Peter and the Shadow Thieves, Escape from the Carnivale, and Cave of the Dark Wind. Ridley Pearson is the best-selling author of eighteen novels, including The Kingdom Keepers;Cut and Run; The Body of David Hayes; The Diary of Ellen Rimbauer; Beyond Recognition; Parallel Lies; and No Witnesses. He was the first American to be awarded the Raymond Chandler/Fulbright Fellowship in Detective Fiction at Oxford University.


Greg Call studied graphic design at the Colorado Institute of Art in Denver. After graduating in 1983, he worked as an Art Director at the Colorado Institute of Art until the desire to do more illustrative work found him in Pasadena, California, attending The Art Center College of Design. Upon graduation in 1988, he began working freelance for clients in music, entertainment, and publishing. Greg has been recognized for his work repeatedly, including awards from the Society of Illustrators and Addy awards among others.
Loading...
or support indie stores by buying on