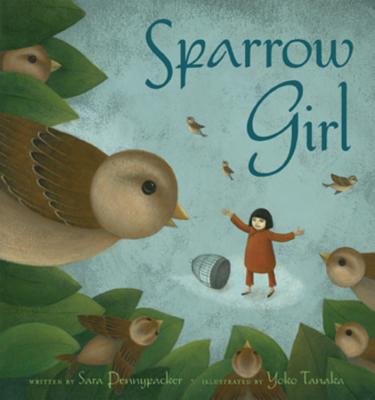 Ming-Li looked up and tried to imagine the sky silent, empty of birds. It was a terrible thought. Her country's leader had called sparrows the enemy of the farmers--they were eating too much grain, he said. He announced a great "Sparrow War" to banish them from China, but Ming-Li did not want to chase the birds away.

As the people of her village gathered with firecrackers and gongs to scatter the sparrows, Ming-Li held her ears and watched in dismay. The birds were falling from the trees, frightened to death! Ming-Li knew she had to do something -- even if she couldn't stop the noise. Quietly, she vowed to save as many sparrows as she could, one by one...

Yoko Tanaka made her children's book debut with Theodosia and the Serpents of Chaos by R.L. LaFevers. Before graduating from Art Center College of Design in Pasadena, California, Yoko won a Gold Award from the Society of Illustrators in Los Angeles. Her work has been featured in several magazines, and in galleries across the globe. Sparrow Girl is her first picture book.
Loading...
or
Not Currently Available for Direct Purchase