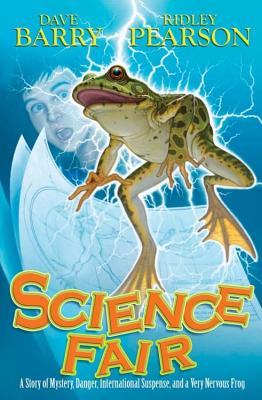 “Dave Barry and Ridley Pearson dazzle us again with a hilarious story about an 8th grade science fair gone awry, featuring Star Wars obsessed fans, henchmen from the country Kprshtskan. and a plot to take over the world. Can our hero save the day before time runs out?”
— Suzanna Hermans, Oblong Books & Music, Rhinebeck, NY
View the List

Dave Barry is a Pulitzer Prize - winning author of more than a dozen books, including Dave Barry's History of the Millennium (So Far); The Shepherd, the Angel, and Walter the Christmas Miracle Dog; Dave Barry's Money Secrets; Dave Barry's Complete Guide to Guys; Dave Barry Slept Here; Big Trouble; and Dave Barry Hits Below the Beltway. Along with Ridley Pearson, he is the co-author of Peter and the Starcatchers, Peter and the Shadow Thieves, Peter and the Secret of Rundoon, Escape from the Carnivale, and Cave of the Dark Wind. Ridley Pearson is the best-selling author of eighteen novels, including Steel Trapp; The Kingdom Keepers; Killer Weekend; Cut and Run; The Body of David Hayes; The Diary of Ellen Rimbauer; Beyond Recognition; Parallel Lies; and No Witnesses. He was the first American to be awarded the Raymond Chandler/Fulbright Fellowship in Detective Fiction at Oxford University.