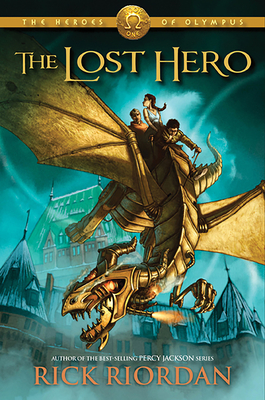 Jason has a problem. He doesn’t remember anything before waking up on a school bus holding hands with a girl. Apparently she’s his girlfriend Piper, his best friend is a kid named Leo, and they’re all students in the Wilderness School, a boarding school for “bad kids.” What he did to end up here, Jason has no idea—except that everything seems very wrong.

Piper has a secret. Her father has been missing for three days, and her vivid nightmares reveal that he’s in terrible danger. Now her boyfriend doesn’t recognize her, and when a freak storm and strange creatures attack during a school field trip, she, Jason, and Leo are whisked away to someplace called Camp Half-Blood. What is going on?

Leo has a way with tools. His new cabin at Camp Half-Blood is filled with them. Seriously, the place beats Wilderness School hands down, with its weapons training, monsters, and fine-looking girls. What’s troubling is the curse everyone keeps talking about, and that a camper’s gone missing. Weirdest of all, his bunkmates insist they are all—including Leo—related to a god.

Rick Riordan, the best-selling author of the Percy Jackson series, pumps up the action and suspense in The Lost Hero, the first book in The Heroes of Olympus series. Fans of demi-gods, prophesies, and quests will be left breathless--and panting for Book Two.

Rick Riordan is the author of the New York Times #1 best-selling The Lost Hero, the first book in the Heroes of Olympus series. Kids across the country voted him Author of the Year for that book through the Children’s Book Council in association with Every Child a Reader. Rick also penned the New York Times #1 best-selling Percy Jackson and the Olympians series: Book One: The Lightning Thief;Book Two: The Sea of Monsters; Book Three: The Titan’s Curse; Book Four: The Battle of the Labyrinth;and Book Five: The Last Olympian. The first two books in his Kane Chronicles, based on Egyptian mythology, The Red Pyramid and The Throne of Fire, were New York Times #1 best sellers as well. Rick lives in San Antonio, Texas, with his wife and two sons. To learn more about him, visit his Web site at www.rickriordan.com.
Loading...
or
Not Currently Available for Direct Purchase