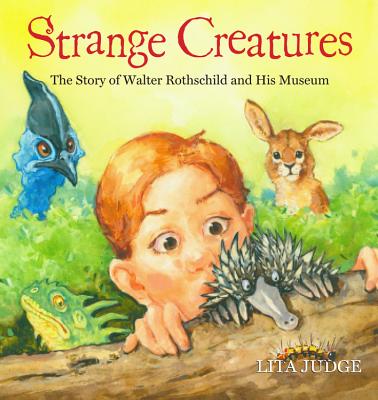 The Story of Walter Rothschild and His Museum

“Walter Rothschild, a shy boy who barely spoke, was the son of one of the richest bankers of the mid-19th century. But Walter didn't need words to study the animals he loved in the garden of his parent's large estate. If it crawled, slithered, or flew, Walter was observing it. As an adult, he founded a museum and left a legacy devoted to a wide diversity of species. Magnificent!”
— Beverly Bauer, Redbery Books, Cable, WI
View the List

Walter Rothschild was born into a family of bankers and was nearly the richest boy in the world. He was also so shy he barely spoke. He had no friends, but he loved every creature that crawled, slithered or flew. At the age of seven, Walter saw his first circus parade. He excitedly declared to his parents: "I'm going to collect animals from all over the world and build a museum!" Soon Walter had his first exotic creatures: kangaroos, wallabies and kiwis. From there his collection grew until it threatened to take over the Rothschild estate. Lord Rothschild wanted his son to lead the family business eventually. But Walter wouldn't give up his dream.
Strange Creatures is the story of how a painfully shy boy followed his passion and became a brilliant scientist, forever changing our understanding of the world's diversity of creatures.

Lita Judge feels a connection to Walter Rothschild. As a shy child, she too grew up with wild creatures. Her grandparents were ornithologists and shared their home with birds of prey. Every summer Lita helped care for the eagles, owls, and hawks her family studied. And she shared another connection too: her grandparents' scientific mentor, Ernst Mayr, began his career on an expedition collecting for Walter Rothschild.

Lita is the author-illustrator of several picture books, including "One Thousand Tracings," which was an ALA Notable book and received the International Reading Association Children's Book Award. About her book, "Pennies for Elephants," "School Library Journal" wrote: "This uplifting tale will surely captivate and hopefully inspire contemporary children."

Lita lives in Peterborough, New Hampshire. For more information about Lita and her books, please visit www.litajudge.com.
Loading...
or
Not Currently Available for Direct Purchase