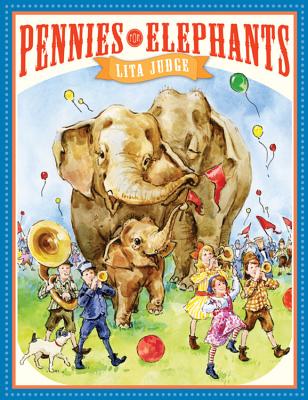 Extra, Extra! Three Trained Pachyderms for Sale! When Dorothy and her brother Henry learn that three beloved local circus elephants will soon be retiring, they are shocked and dismayed-but also inspired! The owner has agreed to sell the elephants to the children of Boston if they can raise the $6,000. They have two months. They'll have to contribute every penny they have, but they're determined to do it. Soon, more and more children are joining in, donating eveything they have to the cause. Fourteen cents from Roger from washing windows. Five cents from Jimmy from the tooth fairy. Even the local cinema makes a contribution-after the children decide to stop spending their money on movies. Eventually, kids from up and down the whole east coast are chipping in! In the end, it's the elephants themselves-Mollie, Waddy, and Tony-who are most grateful for the children's resolute and generous spirit. Following the immense critical success of One Thousand Tracings, Lita Judge has written and illustrated an inspiring and heartwarming picture book, based on a true story of compassion and believing.

Lita Judge is the illustrator of several books for children, including "Mogo, the Third Warthog," "S is for Simon," and "D is for Dinosaurs," and the authorillustrator of "One Thousand Tracings." She lives in Peterborough, New Hampshire, with her husband and two cats.
Loading...
or
Not Currently Available for Direct Purchase