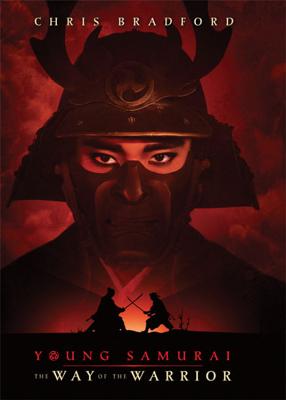 Young Samurai The Way of the Warrior

“Twelve-year-old Jack Fletcher is a rigging monkey on a British vessel navigated by his father until an attack on the ship upends his world. Washed ashore in Japan, Jack is rescued by a great samurai and begins a new life. when he is sent to samurai school, Jack undergoes grueling mental and physical training, and learns about bravery, integrity, and friendship.”
— Ellen Klein, Hooray for Books!, Alexandria, VA
View the List

Jack Fletcher is shipwrecked off the coast of Japan, his beloved father and the crew lie slaughtered by ninja pirates.
Rescued by a legendary master swordsman and brought under his wing, Jack begins the grueling physical and psychological training needed to become a samurai. Life at Samurai school is fraught with difficulty for Jack who is bullied and treated as an outcast.
With his friend the remarkable, beautiful Akiko at his side and all the courage he can muster, Jack has to prove himself. Will he be able to face deadly rivals and challenges that will test him to his very limits?

This is Bradford's first novel, the first in a projected trilogy. Aside from his black belt, he is trained in judo, karate, kickboxing and samurai swordmanship. He is extremely personable. Before writing "Young Samurai" he was a professional musician (played with James Blunt amongst other pop names) and songwriter. He lives in England.
Loading...
or
Not Currently Available for Direct Purchase