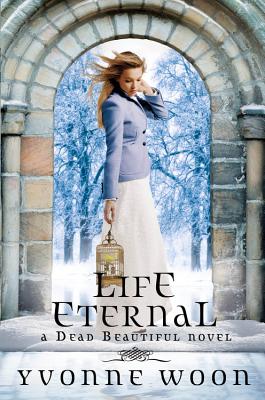 The dark, romantic sequel to Dead Beautiful from Yvonne Woon.

Renée Winters has changed. When she looks in the mirror, a beautiful girl with an older, sadder face stares back. Her condition has doctors mystified, but Renée can never reveal the truth: she died last May, and was brought back to life by the kiss of her Undead soul mate, Dante Berlin.  Now, her separation from Dante becomes almost unbearable. His second life is close to an end, and each passing day means one less that she will spend with the boy who shares her soul. Just when Renée has almost given up hope, she learns of the Nine Sisters—brilliant scholars who, according to legend, found a way to cheat death. She can’t shake the feeling that they are somehow connected to her dreams, strange visions that hint at a discovery so powerful, and so dangerous, that some will stop at nothing to protect it.

Renée thought she knew the truth about life and death. But there is a secret woven through history that holds the only hope for Dante and Renée. Unless they find answers soon, their time together is doomed to be cut short....

"Woon pulls off some interesting twists and captures readers with the romantic connection between Renée and Dante [and] sprinkles in some philosophical ideas that set the story apart from others in the same genre. Riveting and different, it is a real page-turner." —SLJ

"Boarding-school story meets Murder, She Wrote meets the Twilight series in this nifty title, which also offers an attention-grabbing take on zombies." —Booklist

Yvonne Woon grew up in Massachusetts, where she attended Worcester Academy. She lives in New York and holds a Master of Fine Arts degree in fiction from Columbia University. Yvonne is the author of the Dead Beautiful novels, including Dead Beautiful, Life Eternal, and Love Reborn, as well as If You, Then Me. She invites you to visit her online at yvonnewoon.com.
Loading...
or
Not Currently Available for Direct Purchase