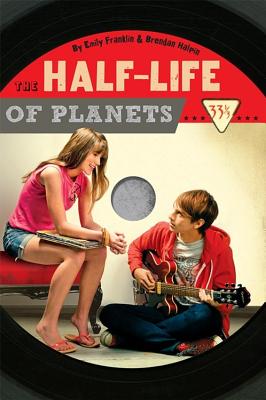 The Half-life of Planets

“The Half-Life of Planets is a poignant account of the friendship that forms when two lives unexpectedly collide, as told from the perspectives of two unlikely friends. Liana, a reputed kissing addict, and Hank, a marginalized teen with Asperger's syndrome, embark on a journey to accept themselves and each other on their own terms rather than allow themselves to be defined by others. This book is an anthem that inspires readers to live beyond the limits of labels.”
— Anna Weddington, Pomegranate Books, Wilmington, NC
View the List

Lianna is an aspiring planetary scientist and also a kissing addict. This summer, though, she plans to spend every kiss-worthy hour in the lab, studying stars.

Hank has never been kissed. He's smart and funny and very socially awkward, because he's got Asperger's syndrome. Hank's plan for the summer is to work at a music store and save enough to buy his beloved Fender Jazzmaster.

What neither Liana nor Hank plan for is their fateful meeting...in the women's bathroom at the hospital. But their star-crossed encounter could be the very best kind.

Two veteran YA authors tell, in alternating chapters, the story of two kids who discover that the best parts of people can't be summed up easily.

Emily Franklin and Brendan Halpin are both accomplished authors in the young adult world. Emily has written a dozen novels for young adults, including the critically-acclaimed Principles of Love series and "The Other Half of Me." Brendan's first novel for young adults, "How Ya Like Me Now," was published in 2007; his second YA effort, "Forever Changes," came out in September 2008. Emily (www.emilyfranklin.com) lives in Newton, MA; Brendan (www.brendanhalpin.com) resides in Jamaica Plain, MA.
Loading...
or
Not Currently Available for Direct Purchase