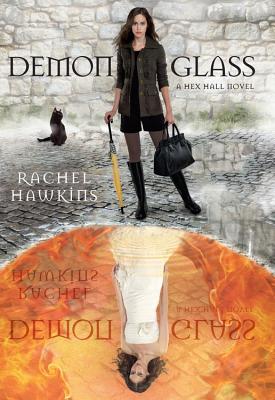 “Hawkins doesn't disappoint in this fast paced sequel to her debut novel, Hex Hall. Sophie, Jenna, Archer and Cal are all back, as is Hawkins' trademark sarcastic sense of humor. As summer vacation begins, Sophie's estranged father invites her to stay with him in England to learn what being a demon is all about. Sophie accepts, and travels overseas for a roller coaster ride of spells, attacks, mysteries, betrayals and, of course, romance. This incredible story will leave you hungry for more after a huge cliffhanger ending!”
— Nikole Bonacorsi, The River's End Bookstore, Oswego, NY
View the List

Sophie Mercer thought she was a witch.

That was the whole reason she was sent to Hex Hall, a reform school for delinquent Prodigium (aka witches, shapeshifters, and fairies). But that was before she discovered the family secret, and that her hot crush, Archer Cross, is an agent for The Eye, a group bent on wiping Prodigium off the face of the earth.

Turns out, Sophie's a demon, one of only two in the world-the other being her father. What's worse, she has powers that threaten the lives of everyone she loves. Which is precisely why Sophie decides she must go to London for the Removal, a risky procedure that will either destroy her powers forever - or kill her.
But once Sophie arrives she makes a shocking discovery. Her new housemates? They're demons too. Meaning someone is raising them in secret with creepy plans to use their powers, and probably not for good. Meanwhile, The Eye is set on hunting Sophie down, and they're using Acher to do it. But it's not like she has feelings for him anymore. Does she?

Rachel Hawkins (www.rachel-hawkins.com) was a high school English teacher before becoming a full-time writer. She lives with her family in Alabama, and is currently at work on the third book in the Hex Hall series. To the best of her knowledge, Rachel is not a witch, though some of her former students may disagree....
Loading...
or
Not Currently Available for Direct Purchase