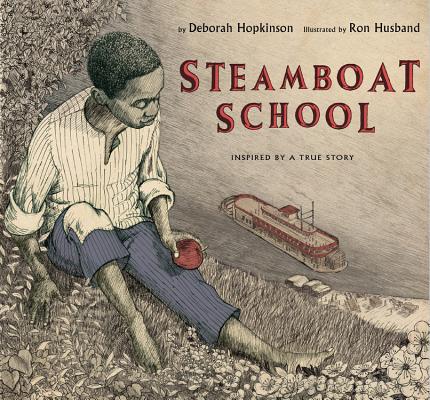 When James first started school, his sister practically had to drag him there. The classroom was dark and dreary, and James knew everything outside was more exciting than anything he’d find inside.

But his teacher taught him otherwise. “We make our own light here,” Reverend Meachum told James. And through hard work and learning, they did, until their school was shut down by a new law forbidding African American education in Missouri. Determined to continue teaching his students, Reverend John Berry Meachum decided to build a new school—a floating school in the Mississippi River, just outside the boundary of the unjust law.

Based on true events, Ron Husband's uplifting illustrations bring to life Deborah Hopkinson's tale of a resourceful, determined teacher; his bright, inquisitive students; and their refusal to accept discrimination based on the color of their skin.

"A heartrending book that will inspire readers of all ages to better understand the history of discrimination."—SLJ

"Gentle yet forceful, it’s an affecting tribute to an unsung crusader for equal rights and education."—Publishers Weekly

"An unforgettable story that needs to be known."—Kirkus

Deborah Hopkinson is the author of more than fifty books for young readers including picture books, short fiction, and nonfiction. She has won the SCBWI Golden Kite Award for picture book text twice, and in 2013 received both a YALSA Excellence in Nonfiction honor and a Robert F. Sibert honor for Titanic: Voices from the Disaster. Visit Deborah online at deborahhopkinson.com.

Ron Husband, the first African American animator at Walt Disney Studios, worked on films such as Beauty and the Beast, Aladdin, and The Hunchback of Notre Dame during his thirty-eight years at the company. His illustrations have also been featured in a number of children's publications. Ron lives in San Dimas, California, with his wife. They have three children and three beautiful granddaughters. Learn more about Ron's work online at ronhusband.blogspot.com.