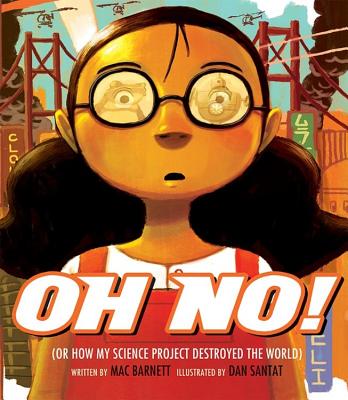 Or How My Science Project Destroyed the World

Some kids are too smart for their own good . . . and maybe for everybody else's good. When an overly ambitious little girl builds a humongous robot for her science fair, she fully expects to win first place. What she doesn't expect is the chaos that follows.

Mac Barnett, a new picture book author on the rise, and Dan Santat, illustrator of Rhea Perlman's Otto Undercover series, combine forces to create a hilarious kid's eye account of the kind of destruction that comes only from a child's good intentions. This book is sure to appeal to kids and parents familiar with the ordeal of science fairs.

Mac Barnett is the New York Times bestselling author of over twenty books for children, including Count the Monkeys, illustrated by Kevin Cornell; Chloe and the Lion, illustrated by Adam Rex; and Extra Yarn and Sam & Dave Dig a Hole, both illustrated by Jon Klassen, and both winners of a Caldecott Honor and the E.B. White Read Aloud Award. He also writes the Terrible Two series with Jory John. Mac lives in Berkeley, California. Visit him at macbarnett.com.

Dan Santat (www.dantat.com) is the author and illustrator of Guild of Geniuses and the illustrator of many books, including the Otto Undercover series by Rhea Perlman and The Secret Life of Walter Kitty by Barbara Jean Hicks. He also has an animated series for Disney called The Replacements. His first book with Hyperion, Always Lots of Heinies at the Zoo, published in May 2009. He lives in Southern California.
or support indie stores by buying on