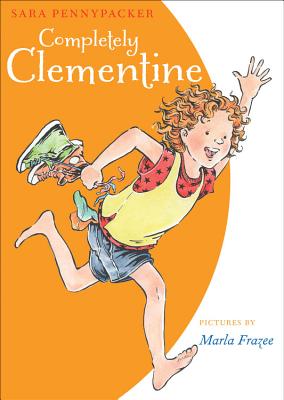 Summer is coming, and Clementine is not ready. She is not ready to start speaking to her father again, because she's still mad at him for eating meat. Instead, she gives him drawings of animals she knows would not want to be somebody's dinner.

Then there is the new baby on the way. Clementine's mom sure doesn't seem ready. She's suddenly crazy about cleaning (Dad says she is nesting), but she doesn't even have a name picked out yet. Clementine just hopes the baby won't be a dud.

What Clementine really isn't ready for is saying good-bye to her third grade teacher. She knows Mr. D'Matz is going to tell her all kinds of things that aren't true. Everything else may be changing around her, but that doesn't mean that Clementine has.

*"Give this to readers of Cleary and Blume and cross your fingers for more."—Kirkus Reviews (starred review)

PRAISE FOR THE TALENTED CLEMENTINE

*"Clementine is a true original. Libraries will need multiple copies of this one, because early chapter-book readers will jump at the chance to spend another eventful week with Clementine."—School Library Journal (starred review)


"Through it all, [Clementine] shines with a vibrant spirit that can never be completely extinguished, even when she is feeling down. Frazee's pen-and-ink drawings perfectly capture Clementine's personality and her world."
—School Library Journal

PRAISE FOR CLEMENTINE, FRIEND OF THE WEEK


*"Pennypacker's writing once again brings creativity, humor, and sensitivity to Clementine and her world. Black-and-white line illustrations grace the book, capturing the child's personality and varied emotions. A must-have for most collections. Fans will be in for another fun serving of their favorite girl named after a fruit."
—School Library Journal (starred review)

PRAISE FOR CLEMENTINE AND THE FAMILY MEETING