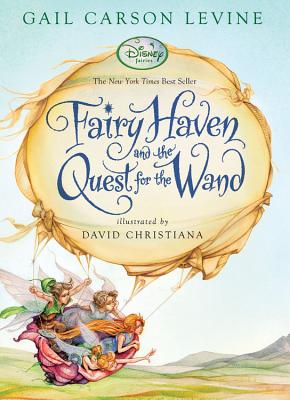 When Gail Carson Levine (http: //gailcarsonlevine.blogspot.com/) was little, she loved to act out fairy tales, and she often made pretend magic wands out of sticks. Back then, she never thought about the intricacies of a wand, and she had no idea she'd ever write a book about one! Gail is also the author of many acclaimed children's books, including the "New York Times" best seller "Fairy Dust and the Quest for the Egg"; Newbery Honor Book "Ella Enchanted"; and "Writing Magic," a how-to guide for young writers. Gail lives with her husband, David, and their Airedale, Baxter, in a 220-year-old farmhouse in New York's Hudson Valley.

David Christiana has illustrated over twenty books for children, including four that he wrote. He lives in Tucson, Arizona, with his wife, Kristie Atwood, and teaches illustration at the University of Arizona and at the Orvieto Institute in Italy.
Loading...
or
Not Currently Available for Direct Purchase