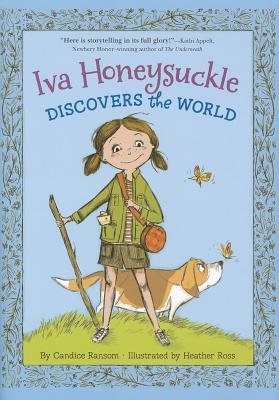 “Eight-year-old Iva is certain that she's destined for greatness and poised to make her first big discovery. But there are bumps in the road -- especially her bossy double-first-cousin, Heaven. All Iva wants in the world is to find her great-great-grandfather's buried treasure and a friend who understands. After many misadventures, Iva despairs of finding either, but it turns out that friendship, like buried treasure, can turn up in the most unexpected places. I loved this charming little book, sprinkled with Southern flair and a quirky cast of small-town characters. Recommended for fans of Clementine and Ivy and Bean.”
— Megan Kennedy, Hooray for Books!, Alexandria, VA
View the List

Eight-year-old Iva Honeycutt is sure that she’s destined for greatness. And this summer Iva has big plans to make her first great discovery: finding General Braddock’s treasure, which was buried somewhere in her small town of Uncertain, Virginia during the French and Indian War. And to make sure she's up to the task, she invents a new name for her discoverer self, Iva Honeysuckle.

Still, even a great discoverer can hit a few bumps on the road. Like Iva’s bossy double-first cousin, Heaven. And her great-great-grandfather Ludwell’s treasure map not exactly being crystal clear. And on top of it all, her supposedly trusty dog, Sweetlips, falling asleep on the job. Must Iva do everything on her own?

Candice Ransom and Heather Ross have created a sweet, self-assured and completely irrepressible heroine in Iva.

Candice Ransom (www.candiceransom.com ) has published more than one hundred books for children, including Liberty Street, The Promise Quilt, and The Big Green Pocketbook. She lives with her husband in Fredericksburg, Virginia.

Heather Ross (www.heatherross.squarespace.com) is an artist, author and textile designer. Her first book, Weekend Sewing, came out in 2009. She has been featured on The Martha Stewart Show. Heather's home and studio are in New York City.
Loading...
or
Not Currently Available for Direct Purchase