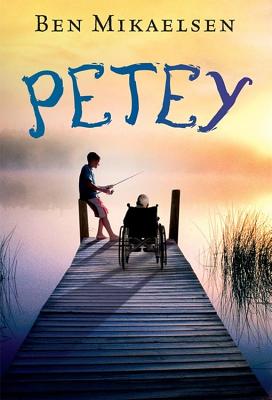 In 1922, at the age of two, Petey's distraught parents commit him to the state's insane asylum, unaware that their son is actually suffering from severe cerebral palsy. Bound by his wheelchair and struggling to communicate with the people around him, Petey finds a way to remain kind and generous despite the horrific conditions in his new "home." Through the decades, he befriends several caretakers but is heartbroken when each eventually leaves him. Determined not to be hurt again, he vows to no longer let hope of lifelong friends and family torment him.

That changes after he is moved into a nursing home and meets a young teen named Trevor Ladd; he sees something in the boy and decides to risk friendship one last time. Trevor, new to town and a bit of a loner, is at first weary of the old man in the wheelchair. But after hearing more of his story, Trevor learns that there is much more to Petey than meets the eye.

Petey is a touching story of friendship, discovery, and the uplifting power of the human spirit.

Ben Mikaelsen is the award-winning author of many books for children, including Petey, Countdown, Rescue Josh McGuire, Stranded, and Sparrow Hawk Red. He lives in Bozeman, Montana.
Loading...
or
Not Currently Available for Direct Purchase