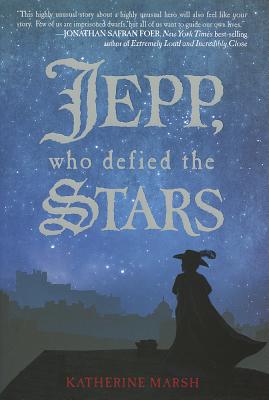 Jepp, Who Defied the Stars

“Combine a teenage dwarf, intricate 16th century historical detail that feels almost magical, court intrigue, astrology, and the debate surrounding fate versus free will, and you've got a stellar book. The story follows Jepp from his humble boyhood home to a palace where he's the plaything of royalty, and then to an isolated island dominated by a brilliant and eccentric astronomer. The characters are all vividly drawn, and the wonderful writing pulls you in.”
— Deborah Johnson, Barstons Child's Play, Washington, DC
View the List

New York Times Notable Children’s Books of 2012
The Wall Street Journal Best Children’s Books of 2012“This highly unusual story about a highly unusual hero will also feel like your story. Few of us are imprisoned dwarfs, but all of us want to guide our own lives.” —Jonathan Safran Foer, New York Times best-selling author of Extremely Loud and Incredibly Close“Rich, absorbing storytelling—a terrific read in every way.” —Nancy Werlin, National Book Award Finalist and author of Impossible"Delightful characters, unique setting, and lovely prose. This is historical fiction at its best!" —Ruta Sepetys, New York Times best-selling author of Between Shades of GrayFate:
Is it written in the stars from the moment we are born?
Or is it a bendable thing that we can shape with our own hands?
Jepp of Astraveld needs to know.

He left his countryside home on the empty promise of a stranger, only to become a captive in a luxurious prison: Coudenberg Palace, the royal court of the Spanish Infanta. Nobody warned Jepp that as a court dwarf, daily injustices would become his seemingly unshakable fate. If the humiliations were his alone, perhaps he could endure them; but it breaks Jepp’s heart to see his friend Lia suffer.

After Jepp and Lia attempt a daring escape from the palace, Jepp is imprisoned again, alone in a cage. Now, spirited across Europe in a kidnapper’s carriage, Jepp fears where his unfortunate stars may lead him. But he can't even begin to imagine the brilliant and eccentric new master—a man devoted to uncovering the secrets of the stars—who awaits him. Or the girl who will help him mend his heart and unearth the long-buried secrets of his past.

Masterfully written, grippingly paced, and inspired by real histori­cal characters, Jepp, Who Defied the Stars is the tale of an extraordinary hero and his inspiring quest to become the master of his own destiny.

Katherine Marsh is the Edgar Award-winning author of The Night Tourist and The Twilight Prisoner. She spent a decade as a journalist, including as a reporter for Rolling Stone and as managing editor of The New Republic. For her latest novel, Jepp, Who Defied the Stars, Katherine drew on her childhood fascination with the portraits of court dwarfs by Spanish painter Diego Velazquez. A New York native and a Yale graduate, she currently lives in Washington, DC, with her husband and two children.
Loading...
or
Not Currently Available for Direct Purchase