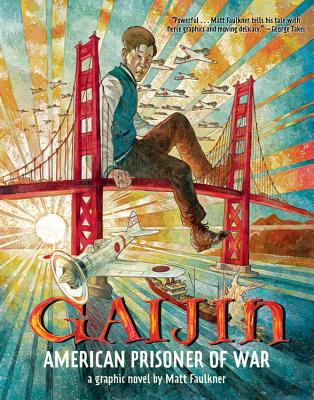 This searing, cinematic graphic novel, by acclaimed author Matt Faulkner follows the story of Koji, a biracial prisoner in WWII America as he struggles to find his place.

With a white mother and a Japanese father, Koji Miyamoto quickly realizes that his home in San Francisco is no longer a welcoming one after Pearl Harbor is attacked. And once he's sent to an internment camp, he learns that being half white at the camp is just as difficult as being half Japanese on the streets of an American city during WWII. Koji's story, based on true events, is brought to life by Matt Faulkner's powerful illustrations that reveal Koji struggling to find his place in a tumultuous world-one where he is a prisoner of war in his own country.

Matt Faulkner, a graduate of Rhode Island School of Design, is an acclaimed illustrator who has written and illustrated a number of children's books, including Gaijin: American Prisoner of War, The Moon Clock, Black Belt, and A Taste of Colored Water. Matt lives with his wife, Kris Remenar, an author and children's librarian, and their children, in southeast Michigan. Visit him at www.mattfaulkner.com.
Loading...
or support indie stores by buying on
(This book is on backorder)