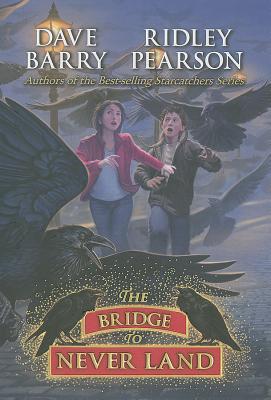 The Bridge to Never Land (Peter and the Starcatchers)

One summer morning while Aidan and Sarah are visiting their grandfather, they discover a secret compartment in his battered wooden desk. Inside is a yellowed envelope that contains a piece of very thin, almost translucent, white paper, on which, handwritten in black ink, are a series of seemingly random lines; among them are what appear to be fragments of letters, but not enough to make sense. At the bottom of the page is a verse about Peter Peter and a reference to a real hotel in London.
As it happens, the family is about to embark on a trip to Europe, so the children decide that while in London, they will try to locate the hotel. Through some careful sleuthing, they manage to discover its location, and once inside, they find another clue.
The Bridge to Never Land will take Sarah and Aidan on a quest that will challenge them to solve a series of puzzles, which will gradually convince them that Peter Pan is not fiction after all. They will discover what happened to the remainder of the starstuff cache that Wendy and Peter fought to protect many years ago. But that's only the beginning. They'll find that in the early twentieth century, Wendy and the other Starcatchers embarked onone last great mission—tofind a way to protect Never Land island, with magical creatures and its precious starstuff supply, from the increasingly intrusive the outside world.

Dave Barry is a Pulitzer Prize-winning author of more than a dozen books, including Dave Barry's History of the Millennium (So Far); The Shepherd, the Angel, and Walter the Christmas Miracle Dog; Dave Barry's Money Secrets; and Big Trouble. Along with Ridley Pearson, he is the co-author of Peter and the Starcatchers, Peter and the Shadow Thieves, Peter and the Secret of Rundoon, Escape from the Carnivale, Cave of the Dark Wind, Blood Tide, and Science Fair.