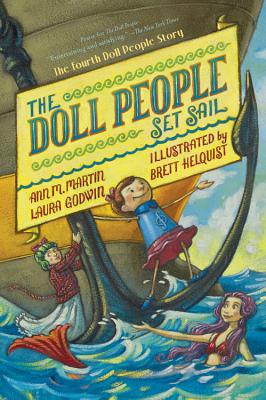 Annabelle Doll, Tiffany Funcraft, and their families are whisked out to sea when the Palmers accidentally place them in a box destined for charity donation. And it turns out they're not alone-there are plenty of other doll people on the ship, too. After traveling thousands of miles, will they be able to find their way home?

In the fourth installment in the beloved Doll People series, Brett Helquist joins Ann M. Martin and Laura Godwin on another exhilarating adventure from a doll's-eye view.

"Fans will welcome aboard Helquist, whose artwork is inspired by and takes off from the excellent illustrations established in the earlier books by Brian Selznick; indeed, Annabelle is even more winsome and expressive here.... Readers are guaranteed very smooth sailing."—Kirkus Reviews

* "A rousing adventure that treats fans to thrilling action (on a miniature scale) and personable new dolls to discover."—Publishers Weekly, starred review

"The fourth installment of 'The Doll People' series is an adventure on the high seas.... This is a good choice for independent readers ready to try something longer."—School Library Journal

"Though it's not necessary to have read the first three entries, it's the stalwart fans who will be cheering 'Doll power!' the loudest as these beloved characters prove once again they can all work together despite their very different personalities, the Dolls and the Funcrafts combining their traits of caution and courage in the best way possible."—Horn Book

* "Doll lovers may well approach their imaginative play with renewed enthusiasm and a sense of wonder after reading this fun-filled adventure."—Publishers Weekly, starred review

* "Little girls are in for a marvelous treat in this delicious fantasy."—Kirkus Reviews, starred review

* "A lighthearted touch and dash of drama make this a satisfying read. Selznick's illustrations are perfectly suited to the innocent charm of the dolls. "—School Library Journal, starred review

"It is entertaining and satisfying, and likely to hold the attention of young readers, regardless of their interest in dolls."—The New York Times

"[A] cozy and gently imaginative adventure."—Bulletin of the Center for Children?s Books

* "Wrapped in humor and adventure are serious considerations of self-esteem, the power of intimidation, and the nature of friendship."—Kirkus Reviews, starred review

* "Fast-paced, satisfyingly developed, the book is doubly enjoyable for its foundation in a solidly imagined doll culture."—Publishers Weekly, starred review

"Gentle humor, believable characters with distinct personalities, and a strong plotline will keep readers coming back for more."—Booklist

Laura Godwin, also known as Nola Buck, is the author of many popular picture books for children, including Oh, Cats!; Owl Sees Owl; This Is the Firefighter; and Christmas in the Manger. She is also the author of the bestselling Doll People series with Ann M. Martin. Born and raised in Alberta, Canada, she now lives in New York City.
Loading...
or
Not Currently Available for Direct Purchase