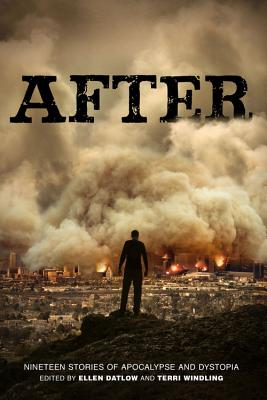 After (Nineteen Stories of Apocalypse and Dystopia)

If the melt-down, flood, plague, the third World War, new Ice Age, Rapture, alien invasion, clamp-down, meteor, or something else entirely hit today, what would tomorrow look like? Some of the biggest names in YA and adult literature answer that very question in this short story anthology, each story exploring the lives of teen protagonists raised in catastrophe's wake—whether set in the days after the change, or decades far in the future.

Ellen Datlow has been an editor of Science Fiction, Dark Fantasy, and Horror for over thirty years, winning several Hugo and Locus Awards, nine World Fantasy Awards, the International Horror Guild Award, the Shirley Jackson Award, the Bram Stoker Award, and many other honors for her work. She has edited numerous anthologies for adults, young adults, and middle grade readers, some of them in partnership with Terri Windling. Ellen lives in New York City.
Terri Windlingis a writer, editor, and artist specializing in fantasy literature and mythic arts. She has published over forty books, including many anthologies for readers young and old, and has won nine World Fantasy Awards, the Bram Stoker Award, and many others. Terri lives with her husband and daughter in a small village in southwest England.
Loading...
or
Not Currently Available for Direct Purchase