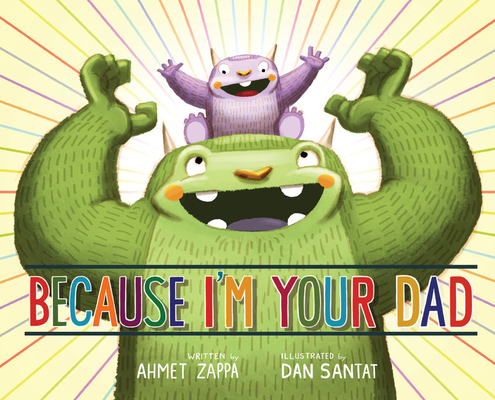 Because I'm Your Dad

Perfect for Father’s Day and all year round, here is the breakout book celebrating all the silliness and sweetness that a dad can share with a child, illustrated by bestselling and award-winning artist Dan Santat!

Because I'm your dad, you can have spaghetti for breakfast, French toast for dinner, and rocky road ice cream in the bathtub!

In a text that's both playful and loving, a father expresses his hopes and dreams for a one-of-a-kind relationship with his child. The book's ending, a moving tribute to the author's father—legendary rock star Frank Zappa—guarantees intergenerational appeal, and award-winning artist Dan Santat (The Adventures of Beekle) brings the fun and endearing scenes to life with whimsical monster characters.

Because I'm your dad, I will do all of these things for you and more . . .because that's what my dad did for me.


Praise For Because I'm Your Dad…

"A rowdy catalogue of Dad moments gets enacted by a creature who resembles a green '60s-era Nauga monster and his purple (gender-neutral) offspring, in this picture book from the son of the late Frank Zappa (and a father himself).... Throughout, Zappa and Santat maintain an entertaining balance between sweet and goofy, protective and raucous."—Publishers Weekly

"Zappa presents a daddy monster who tickles, plays games, plans fun-filled excursions, and offers spaghetti for breakfast and ice cream in the tub.... Young children will probably giggle and warm up to the monster dad, who appears more silly than scary in Santat's exuberant illustrations."—School Library Journal

"Unbashed sentimentality dominates the text in this loving promise from a father to his children.... Zappa wrote this story for his daughter, and it overflows with genuine fatherly affection that he would like to pass on, since his father (avant-garde rocker Frank Zappa) did the same for him."—Kirkus Reviews

Ahmet Zappa is the son of late rock musician/composer Frank Zappa and, as he puts it, "My awesome mother, Gail." Because I'm Your Dad is both a tribute to his happy childhood and a promise to his daughter, Halo. Ahmet grew up with a learning disability and now writes books to help children discover how wonderful reading can be. Through his production company, Monsterfoot Productions, Ahmet has developed several television shows and movies, including The Odd Life of Timothy Green, and he has also collaborated on the Star Darlings chapter book series. He lives in Los Angeles.

Dan Santat is the Caldecott Medal-winning and New York Times bestselling author and illustrator of The Adventures of Beekle: The Unimaginary Friend, Are We There Yet? and After the Fall, as well as the illustrator of many other picture books, including Drawn Together and Lift by Minh Lê, The Alphabet’s Alphabet by Chris Harris, No More Poems! by Rhett Miller, and Crankenstein by Samantha Berger. Dan lives in Southern California with his wife, two kids, and various pets. His website is dansantat.tumblr.com.