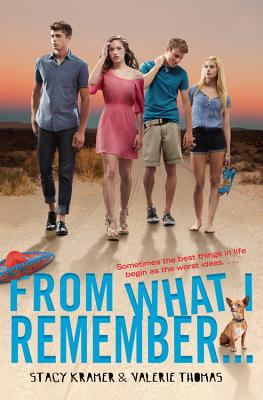 From What I Remember...

KYLIE: Mexico? What a nightmare! I should be putting the finishing touches on my valedictorian speech. Graduation is TODAY! Wait! Is this a wedding band on my finger??

MAX: It started with Kylie’s laptop and a truck full of stolen electronics and it ended in Ensenada. It was hot, the way she broke us out like some chick in an action movie. But now we’re stranded here, with less than twenty-four hours before graduation.

WILL: Saving Kylie Flores from herself is kind of a full-time occupation. Luckily, I, Will Bixby, was born for the job. And when I found out she was stuck in Mexico with dreamy Max Langston, sure, I agreed to bring their passports across the border – but there’s no reason to rush back home right away. This party is just getting started.

LILY: This cannot be happening. It’s like some cruel joke. Or a bad dream. I close my eyes and when I reopen them, they’re still there. Max and Kylie Flores, freak of the century. In bed together. If Kylie thinks I'm giving him up without a fight, she's dead wrong.

Valerie Thomas is the author of the middle-grade novel Karma Bites (Houghton-MIfflin). Before turning to novel writing she had a long career in film, overseeing the development of such films as Philadelphia, Adaptation, and Ulee's Gold, which she also produced. She lives outside New York City with her daughter.

Stacy Kramer writes movies, television and humor pieces for magazines and newspapers. She is currently writing a screenplay for Twentieth Century Fox. Before becoming a writer, Stacy produced movies and television. She lives with her three kids and husband in Brooklyn.