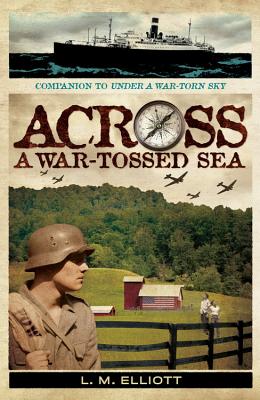 
Praise For Across A War-Tossed Sea…

An emotional, action-packed gem! ...Elliott paints a picture of war that we don't often see, one that is away from the battles, showing life and death in a war-ravaged land. She illustrates through her well-planned story lines how one can prevail through the most adverse of conditions, bringing up many ethical and moral questions. ...An engrossing thrill-ride.—KLIATT

A powerful debut novel of adventure and salvation. Readers, young and old, will be moved by this fine book.—Children's Literature

Henry Forester, a young B-24 flier, is a complex mix of insecurities, unresolved feelings about his punitive father, and heroic aspiration. On his fifteenth mission, he is shot down, having no idea where he has landed. His journey back through Nazi occupied Europe and his involvement with the French Resistance are depicted with chilling realism. Small details (bike wheels in France were made of wood because the Germans had confiscated all the rubber) add both credibility and appeal to this gripping adventure. ...It's packed with action, intrigue, and suspense, but this novel celebrates acts of kindness and heroism without glorifying war.—Booklist

Elliott's fluid style is woven together with vivid historical details from WWII, appropriate for adolescents who seek suspense-filled adventures. Inspired by true stories of WWII, Elliott captures the courage, self-sacrifice, and bravery of the French Resistance forces. Fans of history, culture, language, or just good storytelling will definitely want to read this.—BookPage

L.M. Elliott (www.LMElliott.com) is the author of Under a War-Torn Sky, a NCSS/CBC Notable Book in Social Studies, Jefferson Cup Honor Book, Bank Street College of Education Best Books of the Year, and winner of the Borders' Original Voices Award, and its sequel, A Troubled Peace, also a NCSS/CBC Notable; Annie, Between the States, an IRA Teacher's Choice and NYPL Book for the Teen Age; Give Me Liberty, and Flying South, a Bank Street College Best Children's Book. She lives in Virginia with her family.
Loading...
or
Not Currently Available for Direct Purchase