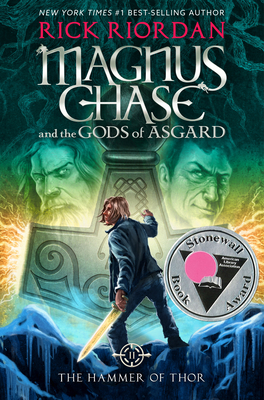 #1 NEW YORK TIMES BEST SELLING AUTHOR
The second installment in Rick Riordan's blockbuster Norse mythology series has Magnus and friends helping the god of thunder find his missing weapon before all Muspellheim breaks loose.
Thor's hammer is missing again. The thunder god has a disturbing habit of misplacing his weapon--the mightiest force in the Nine Worlds. But this time the hammer isn't just lost, it has fallen into enemy hands.
If Magnus Chase and his friends can't retrieve the hammer quickly, the mortal worlds will be defenseless against an onslaught of giants. Ragnarok will begin. The Nine Worlds will burn.
Unfortunately, the only person who can broker a deal for the hammer's return is the gods' worst enemy, Loki--and the price he wants is very high.

"Riordan has once again created a reluctant hero who finds himself out of his depth. He stays fairly close to the spirit of the original myths, twisting them for extra comedic effect—Avengers fans may hardly recognize this blustery, red-headed, TV-binge-watching Thor. There’s appeal for new readers, but Percy Jackson fans will also undoubtedly snap this up, and there’s even some overlap: Magnus’ cousin is Annabeth Chase. Buy extra copies, and prepare for the siege.HIGH-DEMAND BACKSTORY: Norse myths are in right now, and Riordan has the magic touch, a combination that makes the extensive marketing campaign seem almost redundant."—Booklist

Rick Riordan, dubbed “storyteller of the gods” by Publishers Weekly, is the author of three #1 New York Times best-selling middle grade series with 45 million copies sold throughout the world: Percy Jackson and the Olympians, based on Greek mythology; the Kane Chronicles, based on Ancient Egyptian mythology; and the Heroes of Olympus, based on Greek and Roman mythology. Rick collaborated with illustrator John Rocco on two best-selling collections of Greek myths for the whole family: Percy Jackson’s Greek Gods and Percy Jackson’s Greek Heroes. The first book in his Magnus Chase and the Gods of Asgard trilogy based on Norse mythology, The Sword of Summer, also debuted at #1 on the New York Times list. Rick lives in Boston, Massachusetts with his wife and two sons. Follow him on Twitter at @camphalfblood.