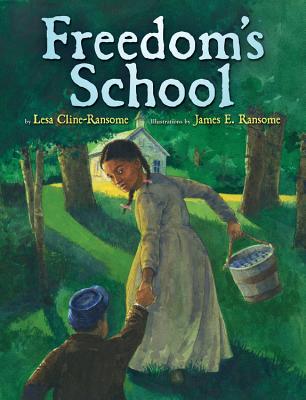 Education means true emancipation in this powerful story set in the rural post-Civil War South, written and illustrated by an award-winning author/artist team.

When Lizzie's parents are granted their freedom from slavery, Mama says its time for Lizzie and her brother Paul to go to a real school—a new one, built just for them. Lizzie can't wait. The scraps of learning she has picked up here and there have just made her hungry for more.

The walk to school is long. Some days it's rainy, or windy, or freezing cold. Sometimes there are dangers lurking along the way, like angry white folks with rocks, or mysterious men on horseback. The schoolhouse is still unpainted, and its very plain, but Lizzie has never seen a prettier sight. Except for maybe the teacher, Mizz Howard, who has brown skin, just like her.

They've finally made it to Freedom's School. But will it be strong enough to stand forever?

"A stunning package that adds to the body of literature documenting the African American experience."—School Library Journal

"Ransome's watercolor paintings are richly evocative of the seasons while also creating memorable characters and emotions. Readers don't need to have been recently emancipated to understand this eloquent testament to the overriding importance of school."—Kirkus Reviews

"James Ransome's watercolors are, as always, emotionally generous, cinematic in their sensibility, and resplendent with gorgeous color.... Readers will come away understanding why it takes more than the stroke of a pen to give people the justice and equality they deserve."—Publishers Weekly

James Ransome has received both the Coretta Scott King Award for Illustration and the IBBY Honor Award for his book, The Creation. He has also received a Coretta Scott King Honor Award for Illustration for Uncle Jed's Barbershop. Ransome has exhibited works in group and solo shows throughout the country and received The Simon Wiesenthal Museum of Tolerance award for his book, The Wagon. In 1999 Let My People Go received the NAACP Image Award for Illustration and Satchel Paige was reviewed in Bank Street College of Education's "The Best Children's Book of the Year." In 2001, James received the Rip Van Winkle Award from the School Library Media Specialists of Southeast New York for the body of his work. How Animals Saved the People received the SEBA (Southeastern Book Association) Best Book of the Year Award in 2002 and the Vermont Center for the Book chose Visiting Day as one of the top ten diversity books of 2002. His work is part of both private and public children's book art collections. The Children's Book Council named James E. Ransome as one of seventy-five authors and illustrators everyone should know. He frequently collaborates with his wife, author Lesa-Cline Ransome, and they live in Rhinebeck, New York, with their four children.