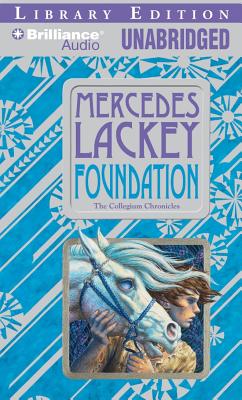 Mags had been working at the Pieters's mine, slaving in the dark, cold seams, looking for sparklies, for as long as he could remember. The children who worked the mine were orphans, kids who had been abandoned, who had lost their parents, or were generally unwanted. But Mags was different.

Mags was Bad Blood, because his parents were bandits who had been killed in a raid by the Royal Guard. Bad Blood because he d been found in a cradle in the bandits's camp. Blood so bad that no one had wanted to take him in except Cole Pieters. When he was big enough to see over the sides of the sluices he had gone to work at the mine. Mags knew nothing of the world beyond the mine, and was unaware of how unusual his paltry existence was. Then some strangers on huge white horses forced their way past the Pieters family and carried him away to Haven to become a Herald Trainee.

Suddenly the whole world opened up for him. He was warm and well fed for the first time in his life, and he had Dallen, his Companion, who seemed more miraculous than an angel. But the world of the Collegium was not all heavenly. There was political upheaval in Valdemar's capital, for the court had been infiltrated by foreign diplomats, who seemed to be more interested in seeding discontent than in actual diplomacy and Mags seemed to be the only one who d noticed.