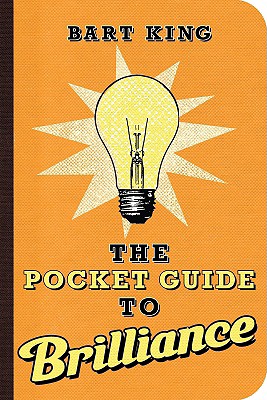 The Pocket Guide to Brilliance

Pocket Guide to Brilliance-Product Description
Punctuated with both sharp and dry wit, Bart King presents a wealth of fascinating trivia. Brilliant people are those who walk father, think deeper, and talk louder than the rest of us. They do what it takes to get the job done, and then some.
Learn from masters of brilliance like:

Bart King, a self-proclaimed dabbler, is interested in games, magic, current events, music, chess, history, literature, geography, travel, crime, science fiction, art, and almost everything else The veteran of many water-balloon wars, he's twice won the prized Arrested Development award from the New York Society of Amateur Psychologists. He earned a master's degree in history from Sonoma State University and has taught middle school for the past fifteen years.

Not only is Bart a wild and crazy boy, he's also the author of bestseller The Big Book of Boy Stuff. Bart subsequently co-authored The Big Book of Girl Stuff with his five sisters and 50 former students. This title won widespread acclaim; if you are skeptical (and you should be ) please see its product page.