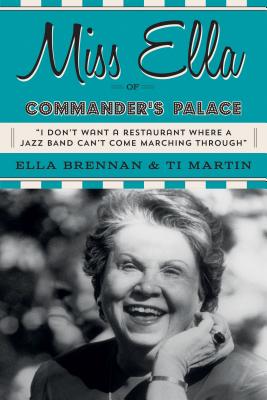 I don't want a restaurant where a jazz band can't come marching through.

Meet Ella Brennan: mother, mentor, blunt-talking fireball, and matriarch of a New Orleans restaurant empire, famous for bringing national attention to Creole cuisine. In this candid autobiography, she shares her life. From childhood in the Great Depression to opening esteemed eateries, it's quite a story to tell.

When she and her family launched Commander's Palace, it became the city's most popular restaurant, where famous chefs such as Paul Prudhomme, Emeril Lagasse, and James Beard Award winner Troy McPhail got their start.

Miss Ella of Commander's Palace describes the drama, the disasters, and the abundance of love, sweat, and grit it takes to become the matriarch of New Orleans' finest restaurant empire.

James Beard Foundation Lifetime Achievement Award winner Ella Brennan was born in 1925 in New Orleans, Louisiana. From her first job at the age of eighteen working in her brother's bar, she has spent her entire professional life in the restaurant business, with her crowning achievement being the Commander's Palace restaurant. She has two children, Ti and Alex, and still lives in New Orleans.

Ti Adelaide Martin is the daughter of Ella Brennan. Raised in New Orleans, she has followed in her mother's footsteps and is now co-proprietor of Commander's Palace. She remembers her mother "always hosting these lavish parties at our house," she recalls. "There were always lots of interesting people there from around the country, many from the culinary world."