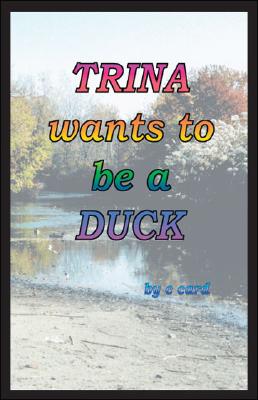 Trina Wants to Be a Duck

Trina, a galactic entity, is reluctant to evolve in the highly anticipated and much expected manner. Colleague adaptors, known as Chrontos, try to engage her, but even with their influence, Trina is in no hurry to conform. While her team-mates practice their skills by transforming into carious beings and objects, Trina was to be a duck.
Pursued by the leaders, Trina agrees to undergo Chrontos training with the understanding that upon completion she will be free to choose her own destiny. The training takes place on Earth however, and proves more difficult than anticipated. It becomes especially challenging, when Trina must balance the Chrontos education along with her escapades as a humans being.
As an assistant in a newspaper, Trina surprisingly enjoys the people as well as the new experience in general, but believes it's boring. Quickly however, she learns that something even the most routine assignment hold hidden deceptions.
AS a Chrontos, Trina is forced to uncover the natural talents she has to offer her team. Through some tough training, she discovers wisdom and insight, but must ultimately learn to trust her instincts.
Trina struggles to be successful, in both the human world and the Chrontos directive. Attempting to blend with, and please the two respective realms, her real challenge lies in achieving self-fulfillment. Despite the tempting adventure and excitement offered by her various options, can Trina just be a duck?